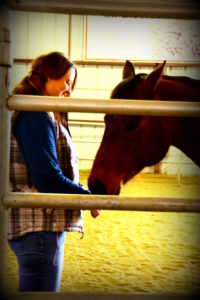 Having witnessed first-hand the healing powers of horses, Julie had been searching for a way to connect more people with horses. After discovering the Touched by a Horse program and training in the Equine Gestalt Coaching Method ®, she now happily co-facilitates with her equine partners to help clients navigate through life changes. Julie is also a nurse, Engineering Manager and grandmother of two beautiful babies. She loves gardening, knitting and anything fiber related. 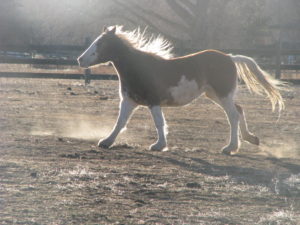 Born in the wild in Wyoming, Valkyrie was adopted as a yearling 9 years ago. She was named after the Norse goddess because she was a ‘tall, leggy blonde’. Her draft heritage contributes to her size but she absolutely loves people and will walk away from food at the chance to work with someone in need. She has a huge heart and gorgeous blue eyes that draw people in. She is the boss of the herd but she ‘allows’ the boys to think they are in charge when it pleases her. 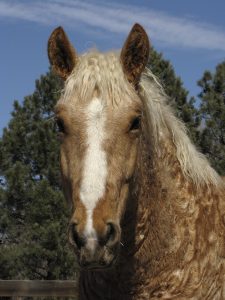 Samwise was also born in the wild in Wyoming and joined our herd when he was about 7 months old at the same time as Val. He is named after the hobbit because of his curly coat. Curlies are believed to be descendants of the Bashkir curlies from the Soviet Union and only one in about 700 mustangs is a curly. Samwise is the diplomat of the herd, befriending everyone and keeping the peace. In the winter, his curly coat and dreds make him look like a stuffed animal. 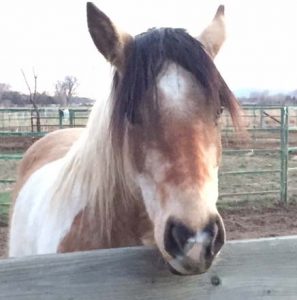 Tres is the third mustang to join the healing herd. He was a rescue so we do not know which herd management area he came from. He is around 12 years old and is a little bit shy, but once he has decided you are ok, he will hang out for scratches and rubs. 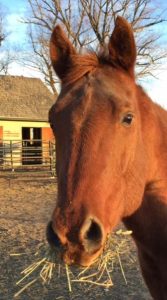 Chance, like his name says, came to us by chance. He was Tres’s buddy and pasture mate and was slated to be put down due to poor feet from an old founder. His sunny sweet disposition made it impossible to leave him behind when we were picking up Tres, so he joined the herd a couple of years ago. He is around 12 years old and despite allegations that he has horrible feet, he can easily outrun everyone else without even breaking a sweat. He loves people and will always come up to say hi. Everyone absolutely loves him and we are lucky to have him.